Series of paintings is a way in which Ofra Friedland explores core themes in her art.  While each work stands alone, it tells a wider story as part of its series. (1)

The context and surroundings in each of her paintings are as important as the topic.  “Everything is interwoven,” she says.

Infusing her creative work is a lifelong mission to recognize and interlace the connections between background and foreground, setting and subject. 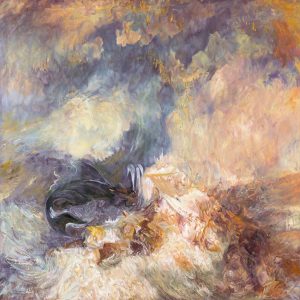 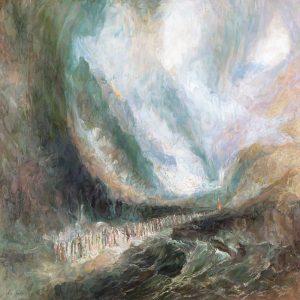 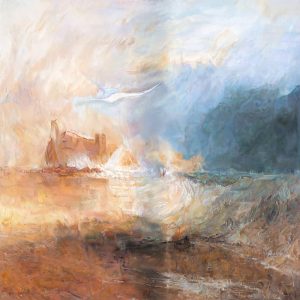 (1) Miracles on Water and It Came to Pass at Midnight — examples of stand-alone paintings which tell their complete story as part of a series.

This series depicts dramatic Biblical events connected by the overwhelming presence of water as a force of nature used for Divine purpose (BT_3958-3360). 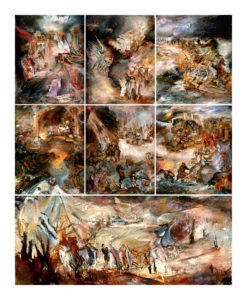 This series of seven paintings replicates the seven verses in liturgical poetry which celebrate the miracles wrought for the Israelites during the Exodus (BT_ 3501).

The core themes which the artist addresses come from the richness and complexity that she sees around her.  Serving her as a vast reservoir are the Hebrew Bible and Jewish tradition; the history and cultures of Israel, particularly Jerusalem;  and the harmony and diversity of nature — from Israel’s plants and flowers, to its seasons and weather, its water sources and land.

“Ongoing interaction with something so deep and abundant awakens all my senses,” she says.  “I strive to comprehend every aspect of what I see, and to express its essence, its inner truth, in my art.”

The mystical significance of numbers in Jewish tradition is at the heart of this contextual world — a leitmotif of Friedland’s work is series such as The Seven Days of Creation,(2)  The Five Books of Moses, The Seven Species and the 15 paintings which illustrate each verse of King David’s Song of Ascent.  Deepening involvement with the subject sparks the artist’s creative process, taking it in new directions in endless interaction.  Certain sequences, such as The Trees of Israel, constitute an ongoing life study. (3)  Others are painted in several different versions, demonstrating their infinite variety, such The Seven Species — Winter and The Seven Species —Summer. (4)

(2) The Seven Days of Creation

A series of paintings, each one depicting a day of the Creation, as described in the opening of the Book of Genesis (BT 3023-3027).

(3) Trees of Israel — an ongoing series 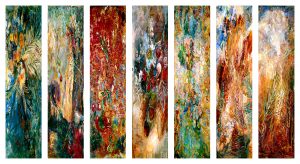 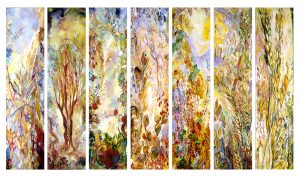 Each painting in this series depicts one of the Seven Species with which, according to the Bible, the Land of Israel is blessed.   They are (right to left): Wheat, Barley, Grape, Fig, Pomegranate, Olive and Date-Honey.  The Winter version (LOI 4010-4016) is shown on the right, and Summer (LOI 4018-4024) on the left.

Topics recur through the many years of Friedland’s artistic output, evolving as they are explored and interpreted anew.  A clear example is her Twelve Tribes series.  In her first series (JS_5850-5859),(5) she pictures the land inheritance of each tribe, with the traditional tribal symbol in the corner of the painting.   The second series (JS 5901-5912) is a more symbolic interpretation — an abstraction of the landscapes with composition and structure that highlight the tribal symbols.  The third series (JS_5950 – JS_5959) takes the 12 gemstones from the sacred breastplate worn by the High Priest, each of which represented a tribe.  Every tribe is portrayed by its traditional emblem in a jewel-shaped setting.  This series was later developed for a site-specific stained glass window at the Aish Kodesh Synagogue in Woodmere, New York (2002-2004).  A decade later, these paintings were recreated for a stained glass installation at the Waldorf Astoria Jerusalem Hotel (2012).(6)   A later work reinterprets these symbols on painted, processed ceramic panels.

Friedland’s major series are shown in the Paintings Collection, together with detailed information about each series. 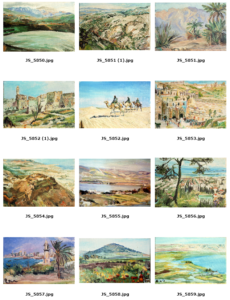 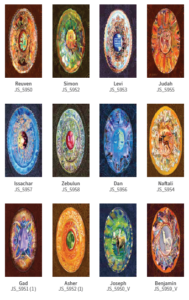